EndSARS : Police Committee On Assessment Of Losses Suffered By Police Embarks On Tour Of Affected Formations

The High-powered Committee for the Assessment of Losses Suffered by the Nigeria Police Force has embarked on assessment tour of different Police formations destroyed by hooligans during the EndSARS protests.

The team led by DCP Patrick Atayero said the assessment was directed by the IGP Mohammed Adamu and is aimed at documenting losses incurred by policemen, families, police formations and making necessary recommendations that will lead to reconstruction and ease the trauma caused during the unrest.

Speaking to policemen on ground, DCP Atayero who was accompanied by senior officers of the Police Force in Anambra State, conveyed the heartfelt sympathy of the IGP to the officers for their loss, assured that the force remains committed to the security of lives and property, and urged the officers to remain committed in the discharge of their duties. 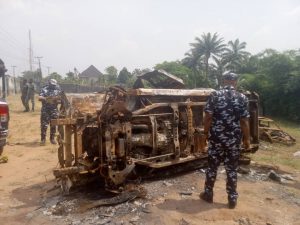 He commended Anambra State Government and individuals who had earlier began re- construction work at some police facilities saying such a feat has proved an existing cordial relationship with the state government and the police.

Also speaking, Anambra State Police Public Relations Officer, SP Mohammed Haruna, who disclosed that the team had earlier visited other states of the federation including Imo, Abia, Ebonyi, Calabar, said that the team has commiserated with bereaved families, injured policemen and assured that they would compile all property destroyed and report to the IGP for further action. 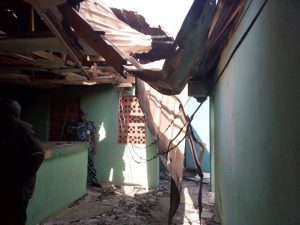