The Nigeria Association of Women Journalists, NAWOJ, has elected Ladi Bala as President to steer its mantle of leadership for the next three years.
The association also elected Comrade Stella Igboka and Tina Ikwuegbu as Vice President and Secretary respectively for Zone C.
The new executive emerged during the associations Tenth Triennial Delegate Conference at Mina, Niger State.

The Minister of Women Affairs, Mrs. Pauline Tallen represented by a former NAWOJ National President, Mrs. Moji Makanjuola charged the association to be good advocate on good governance and gender base issues. 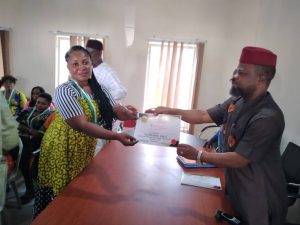 Presenting a paper, titled: Challenges of Female Journalists, an overview”, a former Executive Director of NTA Network, Mrs. Eugenia Abu, who noted that women journalists face tough challenges and called for inclusive stories to amplify women’s issues even as she urged them to show their skills and should not be allowed themselves to be relegated to the background.

Also speaking, the National President of the Nigeria Union of Journalists, Mr. Chris Isiguzo commended female journalists across the country for their cooperation in building the journalism profession.

On her part, the newly elected Vice President of NAWOJ Zone C, comprising Abia, Anambra, Ebonyi, Enugu and Imo States, Comrade Igboka, who is the immediate past chairperson, Anambra State NAWOJ said her reign will entrench enduring peace in the zone.

Comrade Igboka however appealed to others, who lost in the elections to have the spirit of sportsmanship and join hands with the new executive for all round development of the Zone and welfare of members.

Members of the new executive have been inaugurated.